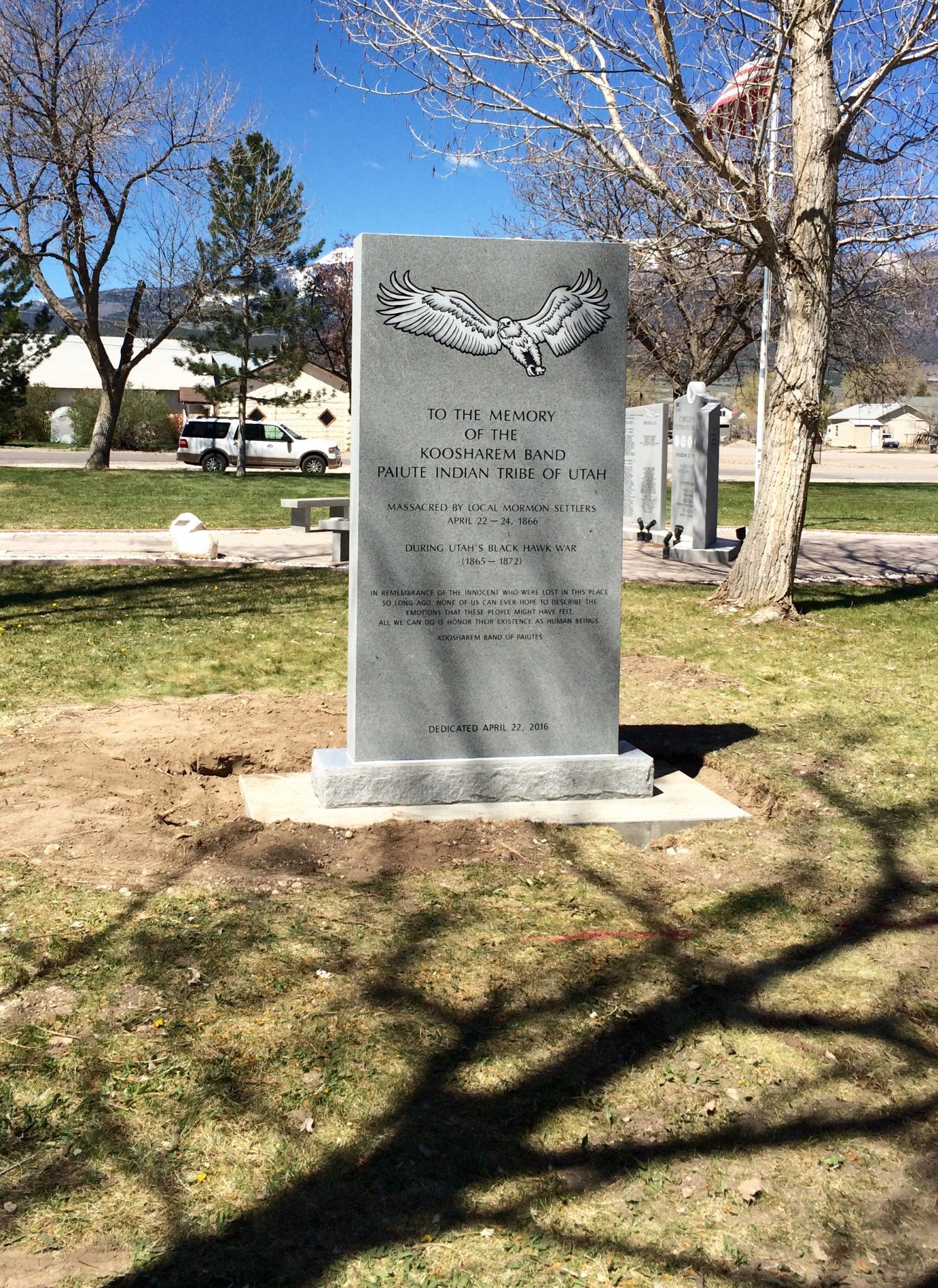 April 21, 1866, will forever be a sorrowful event for the Paiute Indian Tribe of Utah, Koosharem Band, in what is known as the Circleville Massacre. Innocent, friendly Paiutes lost their lives at the hands of the local Mormon settlers. During this time, the Black Hawk War was raging between Native Americans and white settlers over western land expansion and invasion.

In 1865, Ute Indians went to war with settlers in central Utah. In 1866, the Parowan Militia Officer decided to round up all Indians, including the Paiutes, who at the time remained peaceful, and demand they appear in Fort Sanford to be questioned. The Militia distrusted the Paiutes because they felt the Paiutes and Utes were in alliance with each other, but historically this was never proven.

The local settlers and LDS Church Leaders of Circleville took it upon themselves to decide the fate of roughly 30 Paiute, Men, Women, and Children. They tricked the Paiutes into coming to Circleville by imploring them, that Bishop Allred had a letter to read to them from Brigham Young. A portion of the Paiutes had willingly gone into the log church house to hear this letter. The settlers forcefully disarmed the Paiutes and forced them into a cellar. The other Paiutes that chose not to attend on their own accord were forcefully taken from their village and imprisoned with the other captive Paiutes in the cellar. The entire Paiute Village was forced into a cellar to await their fate that was decided on by the Mormon Settlers of Circleville. The settlers sent word to the LDS Apostle Erastus Snow about what they decided to do, and ultimately decided the Paiute needed to be killed. In the dark of the night, the settlers lead the Paiutes one by one out of the cellar, struck them on their heads from behind to stun them, and slit their throats.

LDS Church Apostle Erastus Snow received word about the forceful imprisonment of the Paiute Village in the unused cellar in Circleville, Utah. Trying to intervene, he sent word that the Paiutes should be treated kindly and let go unless hostile. By the time the runner reached Circleville, it was too late. The settlers massacred an entire Paiute Village, with the exception of two adult prisoners and four young children too young to bear witness of the event. The murdered bodies were buried in an unmarked mass grave in a cellar of an unbuilt mill, but the remains have never been located.

According to our Paiute history, three Paiute children were able to escape. A mother told her three children to run when they opened the door to take the next person out. By the dark of the night the three siblings had escaped with bullets whizzing past them. The fate of the escaped was victorious at the time, but as fate would have it, they were discovered in a nearby cave the following day. The now orphaned children were taken to the nearby town of Marysvale, where they were sold. No one wanted the little girl and she was murdered by being taken by her heels and was swung against a wagon wheel until she was lifeless.

The atrocious event of the Circleville Massacre is rarely taught and is hardly known, but on April 21 we choose to remember our ancestors that were peaceful and lost their lives due to paranoia and unfounded suspicion by the local settlers.

Written by Tamra Borchardt-Slayton
Edited by Shane Parashonts
Pictures provided by Dorena Martineau, Picture of two survivors of the Circleville Massacre and Monument placed in 2016

← J&J Vaccine Notice Notice from the Election Board →